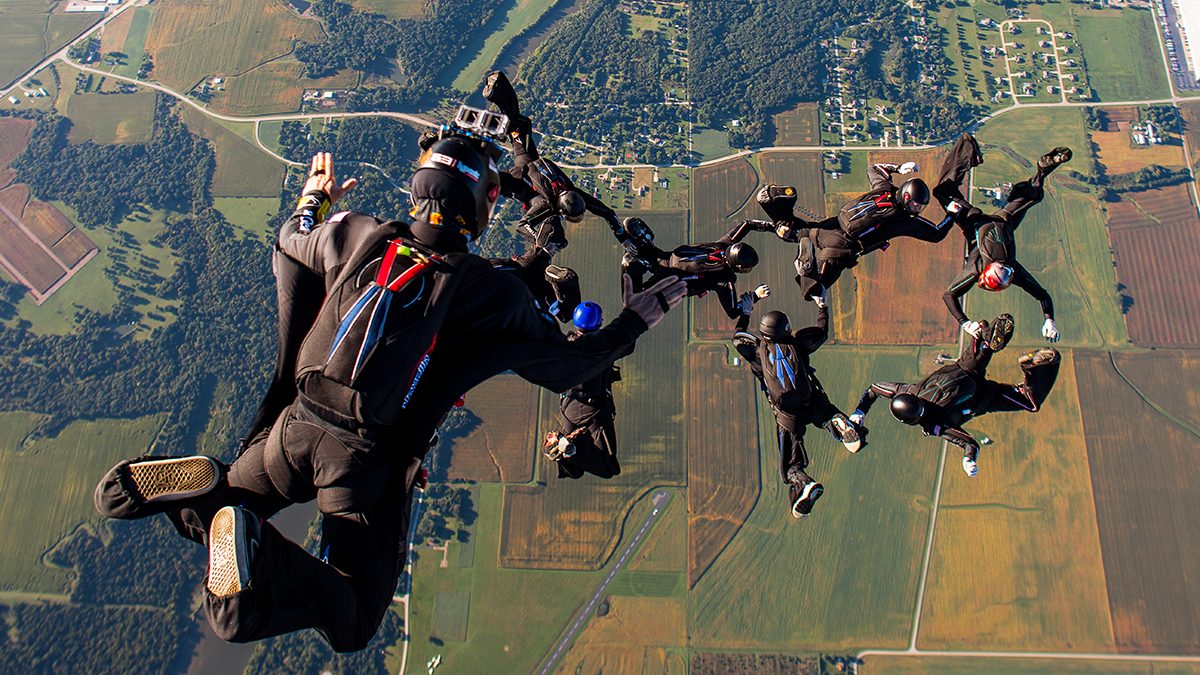 Sequential Formation Skydiving was introduced in 1976, as the third generation of group free fall competitions

(The first generation was free fall relay: «baton pass», in use in the

This is the story of how the sequential competition format came about, and who were the persons to bring it to the World scene.

The FAI – the “World Air Sport Organisation” – is the international institution that  registers all kinds of aviation and space records, from spacewalks down to model aircraft, and authorises (sanctions)  international competitions in aviation sports – particularly World Championships. FAI was established i 1905, so it has has been around for 112 years.

FAI oversees aviation sports through International Air Sport Commissions, one for each sport branch. Parachuting has been included since 1936, when the Commission International de Parachutisme  (CIP) was established, so it has been  included for just over 80 years.

Parachuting involves a number of competition forms , which are governed by subcommittees – the one involving groups manoeuvring in free fall were known under the name “relative work” – RW for short.  In 1988, the CIP swithed acronym to IPC (english) and RW was renamed “Formation Skydiving” – FS.

In the late 1960’ies, FAI’s parachuting section dabbled with some advanced frefall competition exercise called “baton pass”.  It was used at the Adriatic Cups in Yougoslavia, but not much more. At the beginning of the 1970’ies, however, the idea of group freefall competitions was brought up, as a result of the widespread skydiving pastime of “star building”. The building of 10-way ”stars” was particularly popular in the USA.

In 1972, the CIP created a five member RW Subcommittee with Eilif Ness (Norway) as chair. At this time, the dominating competition forms were «style» – individual free fall maneuvering, and «accuracy» – precision landing. An intense fight ensued: as usual, it was the Rebels against the Established, the latter not wanting to share their glory monopoly with others. It didn’t help much that the Rebels had a reputation as unruly, long haired pot smokers.

The CIP went for the most common variety, building a 10-man star in the shortest possible time. Early on, it became clear that many small nations were unable to raise large teams, mostly due to lack of access to large aircraft. This was resolved by designing a competition format for a group of four: a four-man star – all four back-loop separately – build a new four-man star, the whole sequence in the shortest possible time.

It was the US who managed the coup that broke through the barrier. People like Norman Heaton, Bill Ottley (RIP), Chuck McCrone (RIP) and others, got someone high up in the US to say: “OK, let them use Sicily Drop Zone and a couple of Chinooks for a few days”. Which resulted in the first RW World Cup at Fort Bragg – a 10-way speed star / 4-way event.

14 nations participated, all Western. Please remember that this was at the height of the Cold War – which was very cold at the time – it was the Angels against the defined emeny: the Soviet Bloc – it permeated every aspect of life – the world of sports very much so. In the case of parachuting competitions, the Soviets didn’t want any new fangled activities.

The US won the Fort Bragg meet, with a funny team called “Jerry Bird’s All Stars”, who beat the French by a narrow margin.  With that, the wall was broken. The year after, the Angels outvoted the Soviet Bloc in the International Parachuting Commission – the IPC  (CIP it was called then) – authorising a World Champion­ship in RW, to be held in Warendorf, West Germany, in 1975.

Thanks to efforts by South Africa, the development continued. South African Rod Murphy was a member of the RW-committee, and the South African situation at the time, with international boycotts growing, made for official domestic support. The organised RW Cup no. 2, in Wonderboom, Pretoria in 1974. Once more it was 10-way speedstar + 4-way. Again Jerry Bird captained the winning team, ”Wings of Orange”.

That first RW WPC in Warendorf, West Germany, became the only one to feature speed star / 4-way event. 23 nations entered teams, still, all were from the West only. The 10-way event was won by the US team – Captain Hook’s Sky Pirates – again just a hair ahead of the French. But something else happened at Warendorf.

During the meet, a strange group of 16 Americans showed up, who called themselves the US Freefall Exhibition Team, outside the competition. They got two Hueys to lift them to 12,000 feet, and proceeded to make not only a 16-way diamond, but to do a two-point sequence with it. It left us all speechless.

The main architect behind many of USFET’s dives was one of its members, Skratch Garrison – a quiet, low voiced philosopher with a very creative mind. He inspired another one of the team, a long haired, mustachioed 23-year old: B.J. Worth, a gifted young man with an immensely productive mind.

BJ came up with the idea of a totally new RW competition format: sequences of different formations – fixed or random – to be scored by the number of formations made within a certain time.

All of us in the IPC RW subcommittee knew at that time that the speed star competition concept was a dead end – soon we would pull 10-ways out of tailgates – we needed something with open ended scoring. I was chair of that Subcommittee at the time, and I invited this young guy to the next IPC meeting i Paris.

In February of 1976, at Rue Galilee in Paris, BJ presented his proposals for 4-way and 8-way sequential competition formats – complete with dive pools and everything . It had to be discussed step by step, finally fixing the format for the next WPC in 1977.

A strange session followed. BJ presented his case very convincingly I grew more and more surpsised as I led the delegates through five consecutive votings – all proposals were approved, the Soviet bloc voting Yes throughout (in view of later developments, I am convinced that the Soviet bloc was convinced that it was a fad that would die out).

The end result, however, was that we had eliminated a doomed competition format, and replaced it with an open ended system that subsequently proved its suitability and durability unchallenged throughout the next 40 years.

That same year, I was invited to the Z-hills Turkey Meet- they wanted me to assess its potential for hosting a RW WPC. Fortunately, I stayed with Jim Hooper (who really hated me for having taken away the speed star, which was his True Love). But at lest he protected me from being killed by the multitudes of 10-way teams present, who were all furious at me for having quashed their event.

Which goes to prove the hard headedness of skydiving populations – at that time they did not recognise a dead-ended concept that was staring them in the face (at that meet, The Herd pulled off a 4-second 10-way jump – in reality signing the event’s death warrant. I, the paper pusher – the rule writer – got the blame, while BJ, the actual inventor of the whole idea – walked unscathed through it all

Once the new format for Relative Work Skydiving competitions was in place, it was –at that point – untested. It existed on paper only, but we had already made the decision that was binding for the 1977 RW-WPC. Once more, South Africa saved the day: Rod Murphy organised a RW Cup in Oudtshoorn , Southern Cape, in October 1976.

Chief Judge for the event was Charles Shea-Simonds (UK). Participation was limited because South Africa was under intensifying boycott measures, but with entries open, 25 teams from 15 nations entered: 18 teams in 4-way and 7 teams in 8-way teams.

Among the 4-ways were four South African, three US , three French and two Italian 4-way teams. Of 8-ways, there were two South African, two US (BJ was there with «Baby Up»), one French and two International (mixed) teams. Even if the Soviet bloc had voted for the new format, there was no participation from that corner – the cold war was still cold, and the boycott did not help. This test turned out to be very useful, as it resolved a problem that arose when the top teams overran the 5-point dive pools – it was quickly fixed by repeating the formation sets.

It also turned out to be a watershed in terminology: Due to a French all-girl, 4-way team named the «Pink Panthers» refusing to be called a «four man» team, the RW Subcommittee decided to use the term «way» in stead of «man», i.e. «4-way» and «8-way» replaced «4-man» and «8-man», thereby gender-neutralising all RW events.

As late as the FAI-CIP meeting in Zurich, Switzerland in February 1977, the location for the RW WPC in 1977 was not decided. At that meeting, however, Australia came up with Gatton in Queensland – on the other side of the globe – and won the bid.

Again, the entire West turned up, with 19 countries, but none from the Soviet bloc – this time there was no boycott to explain it – it appeared that the East was determined that sequential RW was to be a Western nations event only.

The US won the 8-way, with the team ”Mirror Image”, captained by BJ Worth, with Canada a close second, but winning the 4-way event. Sweden won a surprise silver medal in the 4-way, ahead of USA.

The big international break-through for RW (FS) came in the 1979 RW WPC in Chateauroux, France, as China fielded a full team in both 8-way and 4-way. The Soviet Union sent observers, but no team – no other Soviet bloc country participated. China was the sensation, with 4th place in both in 4-way and 8-way – following a shock opening with 9 points in the first round, ahead of all others – it was close to China winning the 8-way ….

Finally, the East was forced to show up – cold war or not. It was still quite cold, but Gorbatchov’s entry as leader in the Soviet Union started a thaw that would, eventually, normalise the situation …