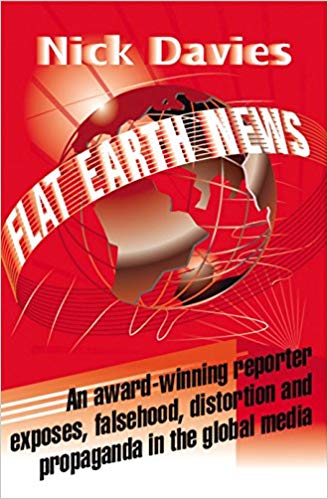 Nick Davies had Random House publish his book “Flat Earth News” in 2008 – 408 pages. It was extensively commented on the Internet. The book itself is long-winded and very detailed with numerous examples.

To comment on it, I downloaded the part of it that carries the above title. Here, I publish this condensed version of the key part of his book.

My comments are the (numbered footnotes) .

Objectivity is the great myth of modern journalism – that good newspapers or broadcasters produce the objective truth. This is devoid of reality, because recording reality objectively always involves selection. Media managers pretend to have a special claim on the truth, but what they generally promote is not neutrality, not objectivity. Neutrality requires the journalist to be invisible and not to express judgements which are essential for journalism.[1]

[1]  EN: It follows that, by Davies’ definition, there cannot be journalism without the reporter expressing judgement – that is: mere reporting of facts and events does not constitute journalism.

Judgements are transferred into the hands of outsiders[2]. Before, news editors and reporters selected stories and angles. Today, journalists are passive processors of material. The news factory rejects material that does not meet the informal rules they themselves have evolved. This generates an account of the world which suffers from three weaknesses:

[2]  EN: “Outsiders” being, apparently, anyone outside the “newsrooms”, as if the “newsrooms” have a monopoly on news judgements and informing the public.

Select stories which are quick to cover, and safe to publish – those are the cheapest. This discourages difficult investigations and favours news stories which are simple and easy to obtain. The reason the story of the trial of O.J. Simpson became front page news all over the globe for months was that the US media pumped out masses of text and pictures every day – it was cheap and easy.

Reporters rely on official sources because they are reporters know that they are far less likely to be attacked if they go with the official line – it is safe. The 1952 Defamation Act (UK) protects journalists from being sued for libel if their story is based on an official statement by any government department or by an officer of any authority.

In the UK, the oldest electric fence is media law – the Official Secrets Act deters journalists and inhibits potential sources by threatening imprisonment for those caught publishing whatever the government deems secret. Libel law is even more powerful, – it covers any story deemed to damage the reputation of its target.

Multiple electric fences are erected by professional PR lobbyists. In the US in 2003, the Parents Television Council (PTC) was responsible for 99.8% of all indecency complaints to the Federal Communications Commission. In the UK, the Countryside Alliance was highly effective in disciplining coverage of the debate about hunting.

The world’s most potent electric fence is Israel’s. Journalists offending the Israel lobby are subjected to formal complaints and pres­sure on their editors. A network of pro‑Israeli pressure groups specialise in com­plaints against the media: Honest Reporting. They have offices in London, New York and Toronto and claims 140,000 members.

This rule requires moral and political values to be safe.

(3) EN: This is a characteristic trait in journalism in most types of media: an anti-conservative, liberal-leaning bias that invariably skews political reporting to go in favour of liberal politics and against non-liberal politics – Margaret Thatcher and Ronald Reagan being the most typical post-war examples (a shining exception being Winston Churchill).

Rule Five: Always give both sides of the story

If you have to publish something not “safe”, put in some quotes from the other side to “balance” the story – to show that you are telling the truth from all sides. This rule is the embodiment of neutrality. However, it may be used to deliberately making safe against most complaints an entirely false story by adding to the final paragraph a 100% denial from the story’s victim.

Rule Six: Give them what they want

Rule Six was precisely expressed by Sunday Express’ editor in 2003 as:

The same rule applies also in quality media[4], because in today’s commercialised form they need stories which sell.  It  also encourages wire agencies to cover subjects which will sell in multiple markets, like lifestyle stories.

As an example: in May 2005, three days after Tony Blair won his third general election, the political editor of the Independent found that some of the Prime Minister’s own Cabinet colleagues were already saying he would have to stand down within eighteen months. He later recalled: “It was the most significant story I’ve had for ages, and I pleaded for it to be the splash, but the paper wanted a change of pace after the election so instead, we splashed a story about Britain’s vanishing flowers”.

Most typical case on record is the tale of Prince Charles and Princess Diana:

Rule Seven: The bias against truth

This extends Rule Six into the way the stories are told. Television’s million tiny tales are constructed in order to sell. The preference is for human interest over issue; for the concrete over the abstract; for the current over the historic. This applies in both print and broadcast.

A mass of stories are not “events”. A train crash which kills a hundred people is News, the hundred car crashes which separately kill a hundred people in a few weeks is not. 387 children vanished in the UK in 2002 – most of them never made a headline. The disappear­ance of Holly Wells and Jessica Chapman in 2002 was an immediate huge story soley because a picture of the two little girls i Manchester United T-shirts.

Rule Eight: Give them what they want to believe in

Ideas and attitudes promoted must not conflict with the readership’s general attitudes. The editor of the Daily Mirror in 2003 apologised for continuing to oppose the invasion of Iraq even after British troops had started fighting. “ – one thing I won’t be doing is telling myself I’m right and they are wrong. The readers are never wrong”[5].

(5) EN: Davies presents this as if it is the editor’s duty to push his or his journalist’s particular view forward as that of the newspaper, disregarding what the readerhip might mean. The consequence of such a belief would be that editor(s) have an obligation to use the power of their newspaper to push their view(s) on their readers, rather that reflect what the opinion of the readership is …

This rule applies in times of perceived crisis. Unlike the other rules, it is compulsory – always invoked by big deaths: the nation mourns; everybody must mourn. Princess Diana’s death 1997 saw Rule Nine at its most powerful. War invokes moral panic. In 1982 the Sunday Times refused to run a story critical to the Falklands war, while fighting was going on.[6]

[6]  EN: This type of “conflict” has arisen over the past three decades (since Watergate) – a gradual development process of the media. Today, media define their mission as being “to question” and “investigate”. This has developed into media pushing their own lines of argument and opinions – qualified or not.  Respect for the role of their own county’s armed forces and desire for the successful completion of their mission is no longer part of their “mission”.

Stories widely published elsewhere must be published even if they clearly lack merit – reinforced by the journalist habit of covering their backs by colluding on stories – to come up with an agreed version. In 2005 it was disclosed that for ten years the New York Times and the Washington Post had been faxing each other their front pages, before the presses rolled.

These ten rules fit the new structure of corporate news organisations. Journalists denied the time to work effectively survive by taking the stories that everybody else is running; reduce them to simplified events; and churn them out fast.

[7]   EN: It is Davies’ basic assumption that the deterioration of journalism is due to the newspaper/TV network owners no longer providing a number of journalists sufficcient to allow each of them enough time to do his job. The question arises: What is that job? Is it to gather stories overlooked today? Is it to investigate leads to potential new stories? Is it to spend more time checking and corrobborating the stories he finds? And finally: how much more time does the journalist need than what is at his disposal today?

The undererlying assumption is that by being provided with more time to do the job, journalists would produce better stories (obviously, they would also produce more stories). Davies offers no suggestions as to what kind of incentives would be neeeded in order to make the journalists allocate their extra time in ways that would suit their employer.

Another Davies assumption is that the extra stories they would find and produce would fill a void that is at present unfilled. What void? Stories found and told in bygone times, when the jounalists were many and had lots of time? What stories were that? Are they really missed today? Was the World a better place whern there were 300,000 journalists where there now are only 100,000?